About Us » School History

On February 15th, 1973 Mrs. Salinas gave birth to a baby boy. He went by the name of Esteban Salinas Jr.. Esteban would later come to be known as "Steve" by his family, friends and in his community.

Steve began his elementary education at Alton Elementary school in his hometown just outside of the much larger Mission, Texas. Alton Elementary was very fortunate to have Steve as their student as he was a extraordinary student, always seeming to strive to do his best to learn all that he could.

Due to the fact that Alton was such a small community, it was part of the larger Mission School District. Because of that it was harder for people to be recognized with all the competition, but Steve began to leave his imprint in the Mission School District and it's community at a very early age. Because of his love for sports, Steve started to participate in various athletic competitions. As an budding athlete at Alton Elementary, he excelled in track and field events going beyond the expectations of his coaches and teammates. The blue ribbons he won in track and field events helped him to become an all around athlete.

Besides his devotion towards sports, Steve loved to go hunting and fishing. As a pet dog, he had a Boxer, named Tiger, who was given to him by his basketball coach. Steve enjoyed running side by side with Tiger when he went jogging. Steve also had a horse that he loved very much who went by the name of Chula.

After finishing his elementary years at Alton, Steve went on to Mission Jr. High, just a few miles away. Aside from participating in track and field, he also took up playing basketball in Jr. High. Steve continued to amaze everyone with his outstanding athletic abilities. Steve received honor after honor recognizing him for his talent. He soon earned the title of "Great Athlete" with barely being in Jr. High for just a short period of time.

While in Jr. High, Steve received the award of MVP (Most Valuable Player) in basketball and the Outstanding Citizen Award. In 1985 He won the Outstanding Mission Jr. High Track Award. He was recognized with this award for winning 19 1st place ribbons and 14 for 2nd place. Steve ran during summer competitions which resulted in him being a finalist at the national level. A great acheivement indeed.

Although Steve spent a lot of his time participating in various sports, which required early practices as well as practices after school, he never lost focus that his education came first. Not only did he stand out in sports but his grades were kept up also. Needless to say, Steve's family was very proud of him.

As he went on to Mission High Steve continued to shine as a track star winning 5 gold medals in one track meet. He kept striving in all he did. As a Mission Eagle, Steve received the "Athlete of the Year Award", the "Outstanding Athlete for Track and Field Award" and the "Basketball Most Valuable Player Award". In football, Steve also stood out playing earning the Outstanding Defensive End Award for two seasons. In his senior year he was first pick for the All District team. In Varsity Basketball he earned the prestigious All District and All Valley MVP Award. As a football player at Mission High Steve wore #36 while during basketball he wore the #45.

Steve received "Perfect Attendance" all four years in high school. He was named in the "Who's Who in America" yearbook, which names the most outstanding students throughout the United States . He was mentioned in the book for his academic and athletic achievements.

It was because of Steve's academic record in the classroom and his remarkable achievements in athletics that many college scouts were after him to get him to attend their colleges. Steve first played for Eastern Arizona University. In 1993 he chose to play for the University of Northern Iowa (U.N.I.) Panthers. There he played football wearing the same number as he did back home at Mission High, #36. Steve frequently continued to add to his collection of awards on several occasions. Steve's parents and family would make special trips on occasion up to northern Iowa just to cheer him on and support their son.

Steve always kept his grade point average high. His Major in college was Criminal Justice. He continued to be in the eyes of recruiters from other football teams. Steve's plans were to become a professional football player and in the future become an officer of the law. His goal was to return to the community that saw him grow up so that he would be the one giving back. One of Steve's reasons for getting a college education and beginning a good career was so that he would be able to care for his parents as they got older.

When Steve would return to his home for Christmas or other occasions, he would make sure to pay a visit to his home town church, San Martin de Porres, where he would give thanks to God for all his blessings. In December of 1994, as he spent time with his family, Steve expressed to them how he could not wait to graduate in May.

Steve's life was cut short after a battle with cancer. With every ounce of his strength, like the champion that he was, Steve fought for his life with valor and honor. In May of 1995, Esteban Salinas Jr. passed away at the M.D. Anderson Hospital in Houston, Texas. He was twenty-two years old. He had one more semester to go so that he could graduate from the University of Northern Iowa .

Steve's death was tremendously heartfelt by all who were privileged in knowing him or simply just knew about him. After his death the University of Northern Iowa awarded an honorary degree to Steve's parents. They also received the 1994 Gateway Athletic Conference football championship ring. The University football team dedicated their next season to the memory of Steve and the number "36" was retired, never to be used again. Another former quarterback from Mission High School , Koy Detmer, also honored Steve by wearing the number "36" on his helmet while he played for the Colorado Buffaloes.

The manner in which Steve led his life touched so many people. His athletic abilities in his high school years, led him to be known, by the press, as "that boy from Alton ". Steve's presence will continue to be in the communities of Alton, Mission and throughout the entire Rio Grande Valley.

It was for his outstanding accomplishments throughout his short life, his passion to represent his community to the best of his ability and his dedication and true love for his family, friends and community that the name of Esteban Salinas Jr. was nominated, chosen and earned the honor of an elementary school in Alton, Texas to be named after him. The ceremony to dedicate the school in his memory was held on Sunday, February 7, 1999. This special event was attended by Mission School District officials, Steve's family and friends plus coaches and staff members from the University of Northern Iowa .

He will live on in the hearts of the children as they journey through their elementary years down the halls of Salinas Elementary and continue to dream of things they may think are beyond their reach but, as Steve proved, can be reached. Steve should be remembered not only for his academic and athletic achievements, but as the young boy from Alton who ran barefoot at his elementary track meets and loved riding his horse Chula.

Finally, we go back to Esteban Sr. and Cecilia Salinas. Mr. And Mrs. Salinas raised a great young man who loved and respected them. Despite their humble ways and the economic hardships they may have had to go through, they did not allow these to be obstacles in their children's education. They instilled in their children love for one another, respect, responsibility, loyalty and a belief in God.

As you pass by the display case on your way to the cafeteria, library or wherever you may be going, catch a glimpse of all that this fine young boy accomplished simply because he believed he could do it. We all need to strive, as Steve did, to make school a positive outcome. Students do your very best in all you do at school, whether it's taking a test or participating in a sport. Steve would want you to hold your heads high and say...

I Am Proud To Be A Student At Esteban "Steve" Salinas Jr. Elementary 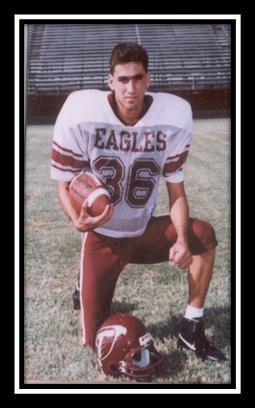